Download PDF application form according to the region of your company.

There are separate forms for worldwide and Taiwan. 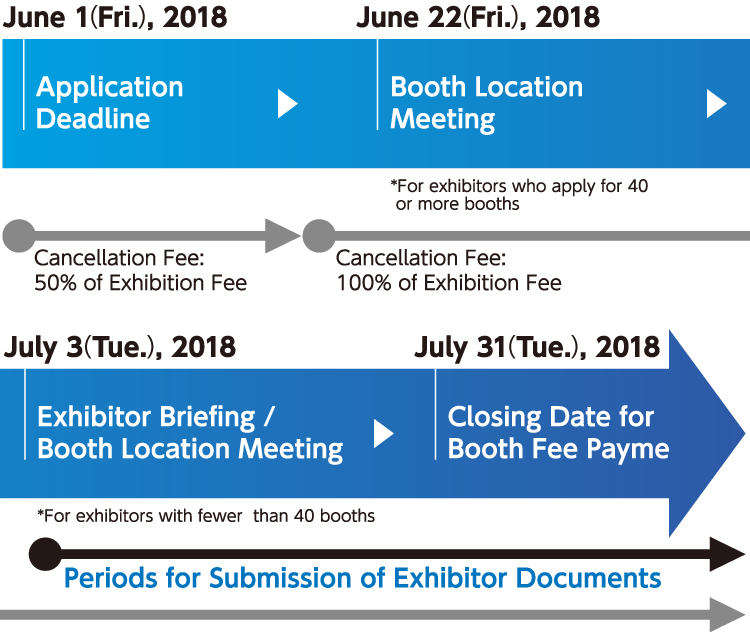 ・The OMO is the operating secretariat of TOKYO GAME SHOW 2018 entrusted by the organizer and co-organizer of the Show.

Eligibility for Exhibiting in the Show

Restriction of Exhibits and Products for Sale

・Promotion of software for consumer use is the content of activities of any exhibitor, in principle.

・Products not handled by exhibitors cannot be exhibited at the Show.

・Sales of products are allowed only in the Merchandise Sales Area.

・Each exhibitor must follow the instructions for booth decorations and structures, sound volume, exhibition contents and methods, manner of performance, etc. are defined in the "Exhibitors Manual" to be supplied by OMO.

・For booth decorations and structures, sound volume, exhibit contents/methods, manner of performance with no provisions in the "Exhibitors Manual", OMO has an authorization to cancel an exhibition, and each exhibitor must follow OMO instructions regardless pre and ongoing exhibition periods.

・Each exhibitor must ensure that its exhibit does not interfere with those of adjacent exhibitors. The OMO will determine, based on the Exhibitors Manual, whether an exhibitor is interfering with another exhibit or whether there is violation of rules, and the exhibitor is to comply with the OMO's determination.

・Each exhibitor must pay all the cost of amendments and cancellations of booth decorations/structures, sound volume, exhibition contents/methods, manners of performance, etc. caused by the instructions of OMO.

- Exhibitors will be asked to select desired booth locations from among available booths, prepared by the organizer in advance, based on the number of booths.

- The selection order, if there are multiple exhibitors with the same number of booths, will be as follows:

1. Exhibitors that participated in the preceding Show (TOKYO GAME SHOW 2018) and applied for booths before the application deadline.

2. Exhibitors that participated in the preceding Show but applied for booths after the deadline.

3. Exhibitors that did not participate in the preceding Show but applied for booths before the deadline.

4. Exhibitors that did not participate in the preceding Show and applied for booths after the deadline.

5. If there are multiple exhibitors in the above conditions, the member of Computer Entertainment Supplier's Association (CESA) has priority to select a booth location.

Further determination in the same conditions will be selected by a lottery. *Depending on the state of applications, there may be cases in which the selection method will be changed in advance. In that case, the OMO will send notification before the booth location selection meeting.

・In the case of an exhibitor applying for 40 or more booth spaces, the organizer will assure the exhibitor of an island configuration (a layout without any adjoining booths).

・It is not possible to change the number of booths at the booth location meeting.

Shape of the Booth Space

・The shape of the booth space (booth depth, ___ and booth width, ___ ) should be applied for by placing whole numbers in the appropriate spaces. (For less than 40 booths)

・An exhibitor's space can be at most 7 booths in deep and maximum of 8 booths in width in the case of less than 7 booth in deep. In case for exhibitor that applied for 49 booths or more, the shape of booth space should be applied to a multiple of 7 and 7 booths in deep.

・To facilitate the overall layout, an exhibitor with a booth space of a difficult shape may be requested to change its shape.

・The exhibitor must decorate its booth space during the preparation period defined by the OMO, and complete decoration before the opening of the Show.

・All exhibits and decorations shall be removed on the designated time by organizer.

・Exhibitors are not allowed to remove any portions or all of their exhibits during the SHOW.

・All exhibitors are required to adhere to the fire and safety rules and regulations that apply to the venue of TOKYO GAME SHOW 2018.

1. Fax or e-mail the application form to the OMO.

2. Upon receiving the application form, the OMO will issue an invoice for the exhibition fee.

3. You are requested to pay your exhibition fee in full within three weeks of the issuance of the invoice.

If an exhibitor cancels an application for any reason, or reduces the number of booths applied for, the following cancellation charge must be paid depending on the date of cancellation.

・Without the express permission of the OMO, an exhibitor is not allowed to transfer or sublease all or any part of its booth space.

・The OMO, regardless of the reason, will not be responsible for any personal injury or property damage (including that to the venue's facilities and fixtures) resulting from the use of the venue by the exhibitor, its employees or any others involved.

・The OMO, regardless of the reason, shall not be responsible for any compensations associated with charge of decorations and structures, sound volume, exhibition contents/methods, manner of performance by the OMO instructions.

Cancellation of the Show

・In the event that the organizer cancels TOKYO GAME SHOW 2018 for its own reasons, making it impossible for the exhibitors to use their contracted booths, the OMO will reimburse the space fees to the exhibitors at a daily rate, calculated by the number of days left in the Show. Apart from the foregoing, the OMO will not bear any liability for cancellation of the Show.

・The organizer / OMO will not be responsible for any damages inflicted on the exhibitor, whether direct or indirect, through force majeure or by command or instruction of a third party.

Use of Personal Information

・The personal information given on this application is offered to the organizer and the co-organizer of TOKYO GAME SHOW.