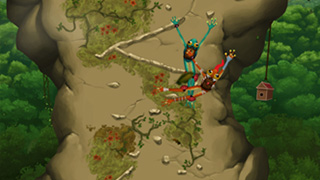 1: What's your background in making games?
We are five first year game design students attending Campus Gotland, at the University of Uppsala. Before university we have all worked individually on smaller personal projects to build knowledge. Frog Climbers is our first collective project.
2: How much time did you spend working on the game?
We spent a total of two months creating the current version.
3: How did you come up with the concept?
We were brainstorming, trying to think of unique ways to control games. At the time we were having a lot of fun with Bennet Foddy's GIRP. In it, you control a climber trying to scale a mountain. We found this a lot of fun but wanted to make the climbing more intuitive, as well as allowing players to play together. Add frogs to the mix, and Frog Climbers was born!
4: What development tools did you use?
We use Unity as our engine, Visual Studio for coding and Photoshop for creating graphics. We also utilized management tools such as Scrum to organize our workflow and make sure everyone always had something to do.
5: What is your goal as a game developer?
To create fun and inspiring experiences and not burn out!
6: Please write a message to future SOWN attendees regarding your expectation and feeling about being selected to be a finalist.
It is a great surprise and pleasure to be selected for SOWN! We are travelling all the way from Sweden to attend the event, so it is an adventure in a lot of ways. We wish future SOWN attendees the best of luck! :)